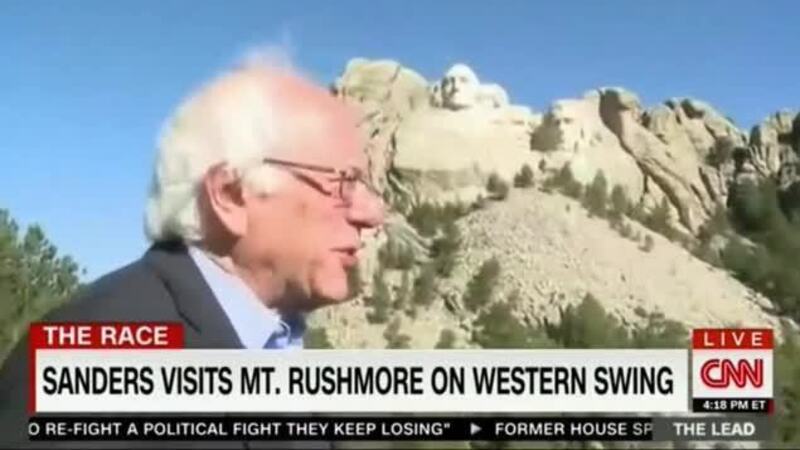 N/A by N/A is licensed under N/A N/A
Resurfaced CNN footage of Bernie Sanders making a presidential campaign stop at Mount Rushmore in 2016 has gone viral.

Donald Trump’s 2020 reelection campaign unearthed the segment on social media after CNN joined other news outlets and liberal activists in suggesting the president’s Fourth of July address at the national memorial was racially problematic.  Then: “This is our country at its very best,” Sanders said, as he gazed in apparent awe at the busts of Presidents George Washington, Thomas Jefferson, Teddy Roosevelt and Abraham Lincoln carved into the Black Hills of South Dakota.

Sanders, an Independent Vermont senator, was echoed by a CNN correspondent Jeff Zeleny, who remarked on the “majesty” of Mount Rushmore, which he called “a monument to four great American presidents.”

Bernie Sanders said "this is our country at its very best," called it an "incredible achievement," and said it "really does make one very proud to be an American." pic.twitter.com/YQ7ozKKICs

Sanders went on to lose his bid for the Democratic nomination in 2016 and failed again in 2020.

Zach Parkinson, the Trump campaign’s deputy communications director, noted that CNN correspondents also gushed over Mount Rushmore when Barack Obama visited during his successful 2008 presidential campaign. Now: Ahead of Trump’s Friday night speech in front of Mount Rushmore, CNN correspondent Leyla Santiago said the president would be “standing in front of a monument to two slaves owners and on land wrestled away from Native Americans.”

CNN: "President Trump will be at Mount Rushmore, where he’ll be standing in front of a monument of two slave owners and on land wrestled away from Native Americans.” pic.twitter.com/UYjzEiUkU9

The reaction: “Double standard, anyone?” tweeted Sen. Ted Cruz, a Texas Republican in response to the Sanders clip.

"You have to be fricken kidding me!!!" said Donald Trump Jr. in a tweet.

The Intercept’s Glenn Greenwald joked on Twitter that “both CNN and Bernie Sanders ought to repent for this praise" based on the media's “new moral stricture” that “Mount Rushmore is a shameful monument to racism and white supremacy.” CNN is not alone in its rapid evolution on the moral status of Mount Rushmore. Sanders, a vocal defender of Indigenous land rights, has yet to comment on the controversy.
N/A by N/A is licensed under N/A N/A